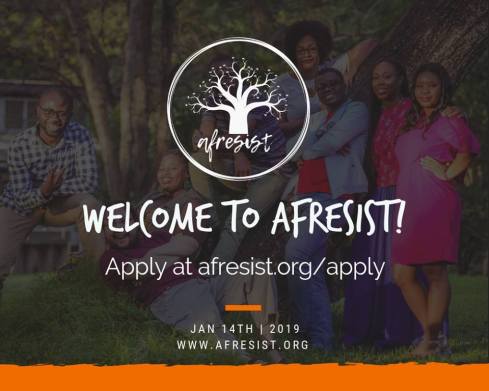 Afresist is a multimedia platform rooted in the values of Pan-Africanism, using technology for the co-creation of alternative models, training, convening and empowering African youth and documenting their work, experiences and movements across the African continent and beyond. Afresist does not necessarily imply civil resistance for regime change – that is already happening on the African Continent – but rather refers to the daily resistance of the millennials in Africa to survive with dignity and build the Africa We Want.

The grievances that erupted in the popular movements in this and other African countries,Benin, Burkina Faso, Togo, Egypt, Libya, Nigeria, Mauritania, Djibouti, Angola were very similar, aiming to bring down long-entrenched authoritarian rulers, or rising up against exploitative economic systems, corruption, inequality and, in particular, youth marginalization. The political and economic contexts of these countries are very similar, and so are their struggles and aspirations.

African youth are organizing in new ways of activism and utilizing new tools like social media and artistic expression to communicate and raise awareness about their causes.

Importantly, they seek to change the status quo, and balance power relations in highly asymmetric conflicts and communities, to allow for effective negotiation, peacebuilding and conflict transformation.

Afresist, therefore, crowdsources this knowledge and documents citizen action on the continent–first and foremost by Africans on the ground–while empowering youth organizers and connecting them with social justice academics, journalists, organizers, researchers and activists everywhere.

What we hope to achieve?